Recreation of news photo not substantially similar to original's expression


Professional freelance photographer Donald Harney took a picture of “a blond girl in a pink coat riding piggyback on her father's shoulders as they emerged from a Palm Sunday service in the Beacon Hill section of Boston.”  A year later, the subjects “became a national media sensation. The father, soon-to-be revealed as [Christian Karl Gerhartsreiter,] a German citizen who had assumed the name Clark Rockefeller, had abducted his daughter during a parental visit and was being sought by law enforcement authorities.”  Harney’s photo was used in an FBI Wanted poster and widely distributed.  He said he didn’t object because he didn’t want to impede the search for the missing child; he was subsequently able to license the photo in multiple media outlets, given that the story and the photo retained substantial public interest.

Harney argued that the photo became the “iconic” image of “the bizarre saga of Gerhartsreiter, a ‘professional’ imposter who had been passing himself off as a member of the high profile Rockefeller family and whose previous false identities included descendant of British royalty, Wall Street investment advisor and rocket scientist.”  (Also, Gerhartsreiter is scheduled to go on trial for murder soon, so there’s that.)  The court interpred this iconicity to mean that “the prominent role of the photograph in the publicity surrounding Reigh's abduction converted his depiction of a happy father and child into a widely recognized symbol of Gerhartsreiter's life of deception.” 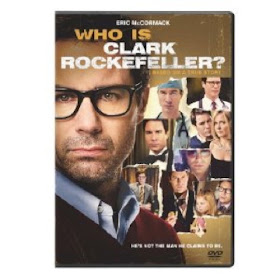 Sony later produced a made-for-TV docudrama, Who is Clark Rockefeller?, based on Gerhartsreiter’s Rockefeller deception.  Sony recreated the photo with the actors using an image “similar in pose and composition to Harney's original, but different in a number of details.” 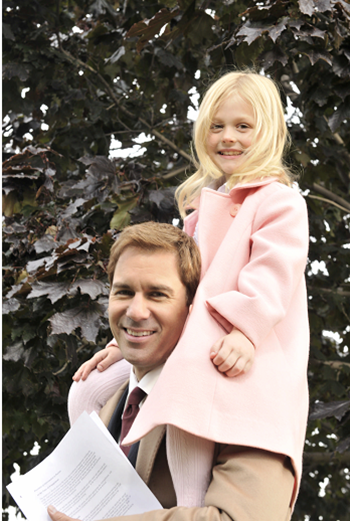 Harney sued for infringement; the district court ruled that no reasonable jury could find substantial similarity; and the court of appeals affirmed.


The court found that the photo and Sony’s image shared several important features:


Both show a young blond girl wearing a long pink coat and light-colored tights riding piggyback on a man's shoulders. The pair are smiling in both photographs, and they are looking straight at the camera at roughly the same angle. … [B]oth pictures show only the father's upper body. In both, the father is holding papers in his left arm with the text of the first page facing the camera.


There were minor clothing differences, as well as more significant differences:


The background behind Gerhartsreither and Reigh [his daughter] consists of a leafless tree, the church spire, and a bright blue sky. In the Image, nearly all of the background consists of dark leaves on the branches of a tree, with bits of white-grey sky peeking through in spots. The papers in Gerhartsreiter's hand are easily identifiable as the program for the service at the Church of the Advent, while the writing on the front of the papers in the actor's hand is not legible. Its text, however, plainly does not resemble the program held by Gerhartsreiter. Reigh is holding up a palm leaf in her left hand, but both of the child actor's hands are by her sides, resting on her legs.


The district court ruled that Sony copied the factual content, but not the expressive elements of the photo.  Harney argued that this constituted too much dissection, but the court of appeals disagreed.  Every work contains noncopyrightable elements that are free for others to use.  In the First Circuit, substantial similarity is assessed first by dissecting the plaintiff’s work to separate expressive elements from unprotected content, then by comparing the two works “holistically,” but “giving weight only to the protected aspects of the plaintiff's work as determined through the dissection.”  Substantial similarity exists if “the ordinary observer, unless he set out to detect the disparities, would be disposed to overlook them, and regard their aesthetic appeal as the same,” as informed by the dissection analysis.  Courts must be careful not to over-dissect.


The court commented that “[a]pplying these principles to news photography, which seeks to accurately document people and events, can be especially challenging.”  In a footnote, the court discussed the “imperfect[]” fit between copyright concepts developed for written works and the visual arts, and cited several sources, including yr. humble correspondent.


Anyway, artists can’t copyright reality, and yet the photographer’s “original conception” of a subject is copyrightable.  Protectable originality can come from, “inter alia, lighting, timing, positioning, angle, and focus,” as well as from creating the subject matter.  “Although the comparison is not perfect, the division between protected and unprotected elements of a photograph could be likened to the separation drawn by copyright law between protected expression and unprotected ideas. Where the photographer is uninvolved in creating his subject, that subject matter -- whether a person, a building, a landscape or something else -- is equivalent to an idea that the law insists be freely available to everyone.”  Alternatively, subject matter the photographer didn’t create could be seen as “facts,” though an original compilation of facts can be protected.


Here, neither the subject matter or its arrangement (which I think here means pose) was attributable to the photographer.  Thus, close attention to Harney’s expressive choices was required.  Sony argued that the only similarity was essentially the idea of a young girl on her father’s shoulders.  Harney, by contrast, argued that Sony took his photo’s expressive heart, including its angle, pose, wardrobe, “and even the color and type of Reigh's coat and the paper Rockefeller has clenched to his chest in his right hand.”  The changes Sony  made, he argued, didn’t change “what these works express about the Rockefeller story.”


The works were indeed similar, as Sony intended, but the question was whether that similarity could be infringing.  The court of appeals reviewed the district court’s dissection de novo, as a legal determination.


The key facts: Harney didn’t arrange the subject matter, but rather captured a moment in time.  He didn’t select their clothes, give them props, or ask them to pose.  “Those aspects of the Rockefellers' appearance are factual realities that exist independently of any photo. They are not Harney's original expression, and they are not copyrightable elements of his photograph.”  True, Harney’s creative combination of various elements—the people in the foreground, holding the program and palm leaf, with the church in the background—“evok[ed] the essence of Beacon Hill on Palm Sunday,” and the lighting “highlights the church and the young daughter and displays the long shadows of early spring.”  But Sony’s image didn’t share those expressive elements; Sony omitted the palm leaf and the church.  The only common element of the photos for which Harney could claim credit, though it was minimally original, was "the position of the individuals relative to the boundaries of the photo, although in the original Clark Rockefeller's face is closer to the camera and less of his body is visible," and no reasonable jury could conclude that was enough to constitute substantial similarity.


The court of appeals patted Harney on the back before kicking his case: “Harney undisputedly produced an original, expressive work.… [The ideas in the photo] are expressed with artistic flair: the framing of Gerhartsreiter and Reigh against the backdrop of the church reflects a distinctive aesthetic sensibility, and Harney's artistry also is reflected in the shadows and vibrant colors in the Photo.”  Putting the subjects “in the middle of the frame as they look straight into the camera, and at a close distance, also involves aesthetic judgments that contribute to the impact of the photograph.”  Nonetheless, the photo consisted primarily of subject matter/facts he had no role in creating, especially the daughter riding piggyback on her father’s shoulders.


Harney argued that the court should take into account “the photograph's unique expression of the Rockefeller saga.”  The court didn’t think this made sense.  The distinction between protectable and unprotectable elements means that protectable expression is sometimes made of components that are free for the taking.  That’s why dissection is required.  Plus, Harney was trying to broaden the scope of his copyright “by attributing to the Photo an idea -- Gerhartsreiter's deception -- that is not discernible from the image itself and did not originate with him.”  The idea of the photo as a symbol of deception only works when we consider the subsequent events that revealed the falsity of this particular father-daughter relationship.


Expanding a photo’s copyright protection based on later events is a bad idea.  Harney argued that we shouldn’t penalize authors fortunate enough to have obscure works become suddenly important.  While it’s true that copyright protects spontaneous photos, and thus incentivizes freelance photographers to take them, ordinary dissection analysis won’t destroy copyright protection for such photos.  Harney’s own photo is protected; people who want to reproduce it will need his permission or fair use (etc.).  And even a recreation might infringe if an ordinary observer would view the resulting image as substantially similar to his original, having filtered out the unprotectable elements. “While Harney should benefit from the added interest in his photograph, as he did through the payments from Vanity Fair and other publications, such newfound interest does not change the originality vel non of the individual components of the work.”  Adding protection to the meaning of the work based on subsequent events would undermine the idea/expression distinction.


Thus, the district court did the dissection properly.  Harney had no rights to the piggyback pose, the clothing, the items the subjects carried, or the church; his rights were in the framing of the people against the background of the church and sky, with each holding a symbol of Palm Sunday, with bright colors/tones and with the subjects in the center of the frame.  With the protectable elements defined, it was clear that almost none of the protectable elements were in Sony’s image.  “Without the Palm Sunday symbols, and without the church in the background -- or any identifiable location -- the Sony photograph does not recreate the original combination of father-daughter, Beacon Hill and Palm Sunday.”  The similarity between the two photos was due largely to “the piggyback pose that was not Harney's creation and is arguably [note: !!] so common that it would not be protected even if Harney had placed Gerhartsreiter and Reigh in that position.”  The photos differed notably in lighting and coloring, “giving them aesthetically dissimilar impacts. Harney's features vivid colors and distinct shadows, while the Image is washed out and is far less attractive or evocative.”  Though Sony’s image copied the placement of the subjects in the frame, which was an element of Harney’s original composition, locating the subject of a photograph in the middle of a frame is "an element of minimal originality and an insufficient basis, without more, to find substantial similarity."


Infringement depends not on whether Sony copied, but on whether Sony copied protected elements of the original.  No jury could conclude that the similarity resulting solely from Sony’s copying of Harney’s original work—the placement in the photo—was substantial.  No reasonable jury would regard the photos’ aesthetic appeal as the same given the differences in background, lighting, and religious detail.


Harney might be sad about Sony’s freedom to copy facts, but, as the Supreme Court has said, “this is not ‘some unforeseen byproduct of a statutory scheme.’”  It is conceptually and constitutionally required.
Rebecca Tushnet at 7:08 PM
Share