Even in the middle of a good decision reversing a finding of likely confusion based simply on targeting ads to the competitor’s trademark, the Ninth Circuit can manage to reach out and do silly things: for example, the court said that (declaratory judgment) plaintiff Network’s use of the mark to buy keywords was use in commerce, and further said that Google’s sale of keywords was the same (“We now agree with the Second Circuit that such use is a ‘use in commerce’ under the Lanham Act.”). I guess we’ve all just agreed secondary and primary liability are the same for keywords? But Google gets a big kiss for its sponsored links labeling later in the opinion doubtless of more practical significance to it than a mostly-lost conceptual battle about trademark use.

Because the panel can’t outright admit that Brookfield’s initial interest confusion analysis was just wrong, it increases the formal complexity of trademark law by hiving off metatag cases—they’re just different from keyword cases, which are different from domain name cases, for which the “internet troika” of similarity of marks, relatedness of goods, and simultaneous use of the internet still makes sense. Though of course we should at this point refer to the “internet duo” since it’s such a rarity to find a mark without an internet presence and the court explicitly endorses giving this factor “little weight”—indeed, the district court erred by weighing similar marketing channels against Network.

Comment: The way I teach the “quality of defendant’s product or service” factor, formally part of the multifactor test in the Second Circuit, is that it actually doesn’t matter because it never favors the defendant but, like an appendix, remains attached to the test because trademark doctrine never gets less complex. Perhaps it is time to recognize that, at least for products with standard marketing channels, the marketing channels factor is equally useless. I can’t remember what Barton Beebe found about this factor empirically, but there is really very little reason to have a factor for marketing separate from the relatedness of the goods/services. In those cases where the marketing distinguishes the parties, for example one sells wholesale and the other retail or where there are substantial geographic limits on the parties’ presence, there should be no problem incorporating that difference into the relatedness factor.

The court says that Brookfield and Playboy (specifically, Judge Berzon’s cautionary concurrence) are consistent because they’re both about poorly labeled results. A casual inspection of Brookfield shows the contrary, as indeed the court recognized just before it began its dance:


We did not find a likelihood of source confusion because the results list from a search for “MovieBuff” would result in a list that included both Brookfield’s and West Coast’s websites, and if the consumer clicked on West Coast’s site its own name was “prominently display[ed].” Thus a consumer was much less likely to be confused about which site he was viewing.
Finding no source confusion, we nonetheless concluded that West Coast’s use of MovieBuff in its metatags was likely to cause initial interest confusion.

As long as no one uses metatags to do anything relevant any more, as Eric Goldman has pointed out many times, then this leaves trademark more ridiculously complex but otherwise better off in terms of recognizing what keyword ads really do. (Of course, when the next thing comes, we will then have to argue whether the new thing is more like metatags, domain names, or keywords. Fun times!)

The likelihood of confusion test is flexible—so we get this statement about the relevance of strength, notable both for its, um, flexible understanding of the Abercrombie spectrum and its unevidenced hypothesizing about how people think about search results: “[Strength (by which the court logically has to mean distinctiveness at all, not strength, but okay!)] is probative of confusion here because a consumer searching for a generic term is more likely to be searching for a product category. By contrast, a user searching for a distinctive term is more likely to be looking for a particular product, and therefore could be more susceptible to confusion when sponsored links appear that advertise a similar product from a different source.” The best I can dig out of this is that sponsored links that appear in response to generic terms need not be well labeled, whereas sponsored links that appear in response to trademarked terms need to be.

Almost as an aside, the court concluded that a registered trademark is “inherently distinctive” and therefore strong (I take it that American Airlines is therefore inherently distinctive—happy news for it, but I have to find another teaching example now!), and that no commercial strength inquiry need be undertaken on a motion for preliminary injunction. I feel like I ought to be misquoting Chinatown: “It’s the Ninth Circuit.” (Okay, as I think about it, it seems to me there’s something going on in US law more generally about registration putting all marks on an equal footing; an almost European view of the matter, where registration dominates use, and I have no objection to this in a vacuum, but I worry about its interaction with dilution law if we interpret “registered” to mean “strong” on a regular basis.)

After suggesting that some interaction between consumer sophistication and strength was relevant, the court ended its discussion of strength. There’s a germ of an idea here, but sophistication isn’t the right concept. Indeed, in keyword cases, strength (marketplace or inherent) should make confusion less likely: the more consumers know about the mark, including its status as a mark, the easier they will find it to identify the official site and to recognize that sites not marked as the official site are offering alternatives, whether the product is Coca-Cola or ActiveBatch software.

The core of the case is this: “However, the proximity of the goods would become less important if advertisements are clearly labeled or consumers exercise a high degree of care, because rather than being misled, the consumer would merely be confronted with choices among similar products.” The same is true of similarity: the relevant similarity is not the similarity between the trademark and the keyword, but the trademark and what the consumer actually saw in response to the keyword.

Even more, the analysis must take into account the increased sophistication of internet users since Brookfield, as well as their experience of the relevant search engines: “Here, even if Network has not clearly identified itself in the text of its ads, Google and Bing have partitioned their search results pages so that the advertisements appear in separately labeled sections for ‘sponsored’ links. The labeling and appearance of the advertisements as they appear on the results page includes more than the text of the advertisement, and must be considered as a whole.”

So, our stripped-down test: “the most relevant factors to the analysis of the likelihood of confusion are: (1) the strength of the mark; (2) the evidence of actual confusion; (3) the type of goods and degree of care likely to be exercised by the purchaser; and (4) the labeling and appearance of the advertisements and the surrounding context on the screen displaying the results page.”

The district court abused its discretion by relying on the internet troika instead of these factors (it also wrongly inferred intent to confuse from deliberate purchase of the keyword, when it should have considered whether Network’s intent was to comparatively advertise).

Here’s one part of the decision I completely endorse: a ten-page appendix of how the ads looked.  Next up: the wonders of color printing! 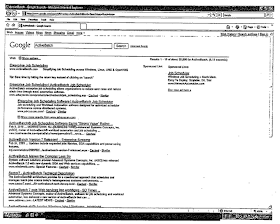